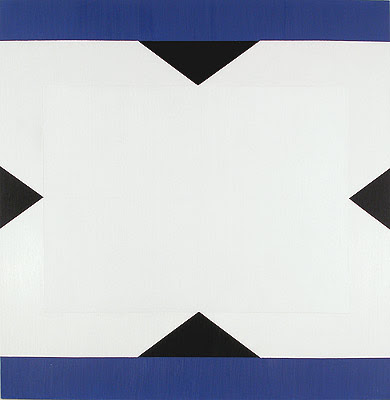 Don Voisine’s show of new work at McKenzie Gallery, that opened in April and closed in June, continued the artist’s exploration of empty space, intersection and movement upon square, wood surfaces. Echoing the mid-century design phenomenon that upheld the fabrication of reductive geometric designs, these paintings focus on specific combinations of color. Black and white typically appear in the center as brighter hues provide a visual framework around the edge of each piece. 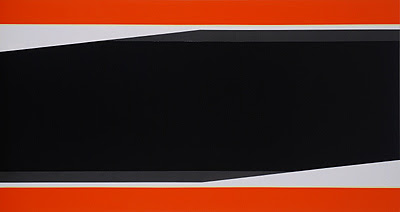 Thru and Thru (2009) captures a thick black line, juxtaposed to itself in the center of the picture plane, creating the representation of line that moves gradually in opposite directions on both sides of the piece. The red and thin yellow strips of color further reveal that each component of Voisine’s work is equal in measurement. Moving point by point into the realm of flat space, the artist’s overall construction of a painted blank surface is peculiar due to the fact that the titles given to each work create a demand for narrative.

Parisian Heiress (2008) for instance, features two thick black lines that intersect within the center of the wood panel. Both strokes reveal two different types of black paint that layers rather than bleeds. Gloss finish clashes with that of matte suggesting the proliferation of pictorial depth. Although the figure is absent from this work, the lines appear to move back and forth within the frame suggesting bodily movement. 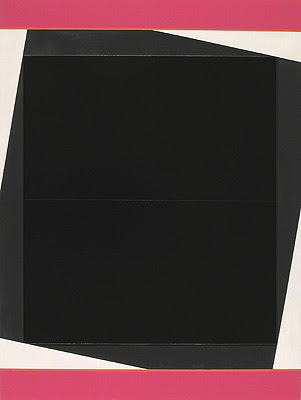 Ding (2008) moves further and plays with the different textures within each medium. In this instance the tilted square lying in between the black and white ones give the impression of a round shape that attempts to roll within the static pink frame. A similar concept surfaces in Sidekick (2008) which consists of two halves that are inverted against each other, creating a sense of staggered movement.

By denying narrative, Voisine’s paintings leave one suspended within moments of contemplative stasis, between our own fantasies and the otherwise vacant character of reality. The artist does not try to mislead the viewer with too many illusionistic embellishments, but instead uses a series of juxtaposing small angles that force a second look. The use of pure geometry accompanies crisp, clean forms that lead the eye toward more space rather than less.

Louis said…
Jill -- I'm curious: how do Voisine's parallels and "equilibrium" create a sense of movement while symmetry in interior design makes everything feel so static? Three candlesticks on a mantel spaced exactly two feet apart look frozen but off-centered there's often a discernible rhythm.
August 2, 2009 at 7:25 AM

Jill Conner said…
Voisine's work utilizes a combination of color contrast and geometric juxtapositions that echo the dynamic moving line that is seen frequently throughout art - chinese scroll paintings or the arabesque, for example. That said his paintings are a series of dry, symmetrical arrangements, as seen in interior design, but tap into a visual depth that is grounded in aesthetics. Voisine shows that art is about looking at a single piece for a significant length of time, something that clashes with the interests inherent to conspicuous consumption.
September 5, 2009 at 2:51 PM

stonecrestcollectibles said…
I feel strongly learning the topic, however I need to learn more on this topic.
Carry on your updates..!! 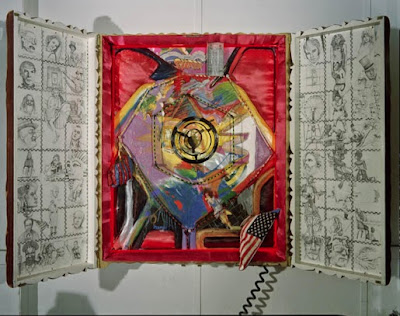